“If you give you will feel better. It’s a law of Nature” 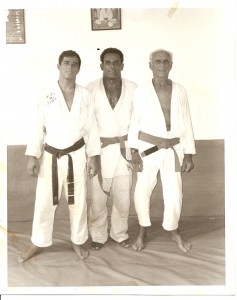 First, I would like to remind you all that this is not a philosophical statement. As a matter of fact, none of the topics approached in my blog or classes are. This statement is as practical as it is real. It is up to each one of us to try and to prove its veracity.

“If you give you will feel better. It’s a law of Nature.” How does it apply to Gracie Jiu Jitsu, to your training and the well-being of your academy?

Giving by definition is the act of handing over something to someone.  Quite often this simple act of giving is a calculation of what you give and what you will get in return. “Giving” applied to your training goes beyond the mechanical act and it is only possible when you come out of yourself and you think about someone else in the same way that you would about yourself. I can tell you about my own self, everything I do, I think about myself and I do it for my own interest – for myself. If I can come out of myself and do the same that I would do for me to someone else that is giving.

You can give a word of encouragement, a hug, an idea, an advice or you can give yourself to your training partner and do everything in your power to allow him to grow, even if you have to stage the position. When I say stage the position, I don’t mean to fake or to be senseless.

First you have to know the position yourself and what you would do if you were the other person. And then you put yourself in prospective as far as the dimension is concerned. Dimension equals the position that is created between the two of you. As you maneuver towards the next and the next position, the only thing you are actually doing is adjusting the speed and resistance to allow your partner to also adjust himself to the desired dimension and allow him to find his speed and resistance to succeed in the position.

It is exactly here that the true giving will make you feel better: When you do things which you are naturally able to do, you are actually not using your free will. Nature gave you this ability already, those are deep-rooted in you, and you are going to progress with all of that rather you give or not. Nonetheless, as you give, and bring yourself to slow down or adjust the position for the other guy, you are brought to learn and understand a different aspect of your training that would not exist if you have not given. At the same token, your partner now understands more than he did before because you have given yourself to facilitate his training. Learn and growth is now possible for both of you and the training can only improve and become more sophisticated and technical.

The more you give, to different partners, the more you will be able to adapt the difference among yourselves and grow while sharing each other’s qualities and embracing one another, rather than growing on each other’s ruin or destruction.

This is a lesson that I’ve learned from the ones who have taught and given me the beautiful sport of Gracie Jiu Jitsu. I encourage you all to create an environment of giving in the academy and benefit from this great law.

Back to the Blog